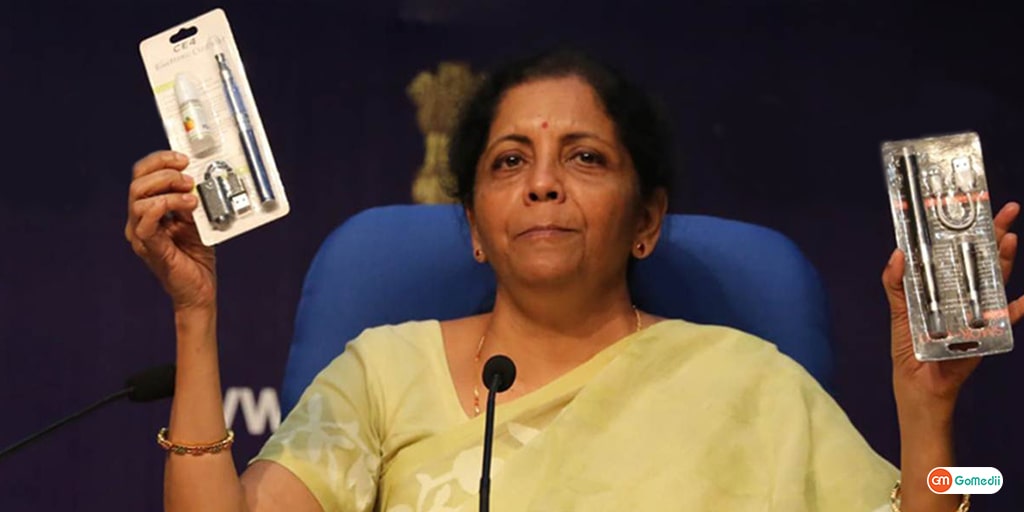 The government has taken a very revolutionary method by banning the e-cigarettes. According to the Indian Express, the decision has been taken by the ministery to prevent the youth from getting addicted to such narcotic drugs more and more. This decision was announced by the finance minister of the country Nirmala Sitharam.

(People Also Like To Read: Dr. Harsh Vardhan: Ayushman Bharat shall Prove to be a Game-Changer)

Banning e-cigarettes has been on the list of one of the 100-day goals of the Ministry of Health and Family Welfare. The Central Drugs Standards Control Organisation in February had ordered all the state drug controllers, saying they should not allow the sale, online sale, manufacture, distribution, trade, import and ban it in all regards.

The Union Cabinet on Wednesday approved an ordinance prohibiting the manufacture and sale of e-cigarettes in India.

According to the Finance minister Nirmala Sitharaman, the cabinet passed a decision making the production, manufacturing, import, export, transport, sale, distribution or advertisements of e-cigarettes a cognizable offense.

The decision was taken, she said due to an alarming rise in vaping among young population. Sitharaman was also heading the Group of Ministers (GoM) that weighed the ordinance to ban e-cigarettes.

According to the announced ordinance, the storage of e-cigarettes will now be a crime and the result is up to six months or fine up to ₹50,000 or both.

The health ministry has proposed that any kind of commercial activity with of the e-cigarettes will lead to jail up to one year or fine up to ₹1 lakh or both for the first-time offenders, and jail of up to three years and fine up to ₹5 lakh for repeat offenders.

According to the health ministry, “E-cigarettes do not burn tobacco but use a heating element to vaporize liquid nicotine, which the user inhales. These are not licensed in India and are often marketed as products to help smokers quit, and harmless than cigarettes. According to government data, more than 460 e-cigarette brands are available in India, with various configurations of nicotine delivery and in over 7,700 flavors.”

Once the ordinance is issued, those holding e-cigarette stocks must declare and deposit stocks with the nearest police station. While a sub-inspector of police will be authorized to search and seize stocks, the central and state governments will be free to designate any other equivalent officer for the same.

It is a great move by the government in concern of the youth in the country. The ban on e-cigarettes was among those plans that the ministry had very well formulated and finally it is done.

E-cigarettes are “Undoubtedly Harmful” said WHO