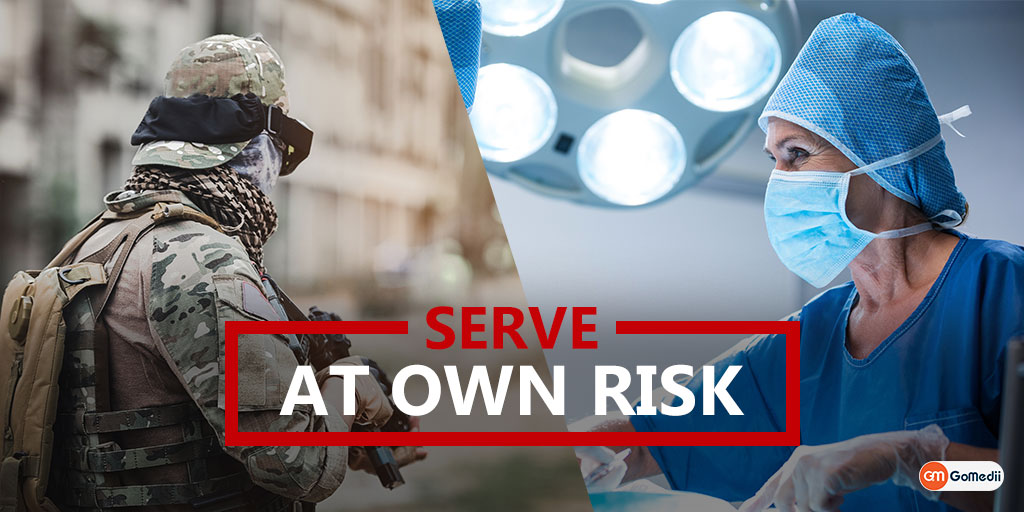 SERVE AT YOUR OWN RISK: Dare to Care @Being Indian Doctor

Assault is a product of immense dissatisfaction among patients due to lack of infrastructure of the public health sector and distrust from the private health sector due to lack of paying capacity at par with the ongoing inflation and mismanaged Indian health care system because of inadequate health policies since long without any long term vision. In fact, till now our health care model has not defined if it is Public Private Partnership (PPP) Model or else despite many central and state health schemes recommending and encouraging contribution of the public and private sector.

(People Also Like To Read: Hypertrichosis: A Rare Werewolf Syndrome)

Short term plans cannot fulfill a long term demand which is widening the gap between doctors and patients as Doctors are leading at the front without adequate role and responsibilities at the policy level still accountable for any mishappening occurring across the nation in all spheres. Lack of initiative to aware the citizens regarding accountability of the authorities is worsening the situation and directly aggravating incidences of assault over doctors pan India.

Apart from the administrator’s negligence and lack of political commitment and accountability, since years is being a major drawback for the Indian health care system. A lot of aspects which are responsible indirectly with these kinds of unfortunate incidences like malpractice of quacks, laboratories and unethical practice of even qualified medical practitioners are also contributing to developing a sense of distrust among the citizens due to uncontrolled privatization.

Young doctors are a major working force for Indian public health sector. Lack of adequate job, academic and financial securities is making them vulnerable to these incidences. Their emotional well being required to handle assault incidences but their stress level is not allowing them to manage the situation in harmony. Youth energy is persistently drained at their peak of the creative age group for the betterment of the fraternity. Unfortunately, we are making this noble profession less attractive for the youth to accept it as a career. Exploitation at the workplace from the seniors is an example of ‘Professional Ragging’ for the young doctors.

Unequal distribution of manpower is also a big issue which is allowing migration of patients from one state to other as per facilities available. Currently, one-third of doctors are taking care of two third of populations and vice-versa, this is creating big trouble at the health care system due to lack of clear cut referring policies for the state and center. And a doctor cannot say no to the patients despite knowing the truth that existing health power is not adequate for them. Policymakers should come ahead to reflect clear cut guidelines for the referral of the patients and execute it at their level.

In cases of assault, police are not taking seriously to these issues due to their prior affiliation with the victims or lack of knowledge for acts against assault over duty doctors. Thus implementation of Central Protection Act against an assault on duty doctors at pan India level should be at the priority level. Police role is crucial in the initial stage thus demands universal protocol and advisory to all state and autonomous institutes would be more beneficial for better outcomes. Audiovisual awareness program regarding rights of patients and responsibilities of doctors and vice-versa should go through effective campaigns through political representatives, mass media, local administration along with active participation of various resident doctors association pan India under the affiliation with United resident and doctors association of India (URDA).

It is common and very unfortunate that we are getting a suspension of resident doctors across the nation who tried to become a whistleblower, so it should be the responsibility of the administration to save them and secure their job rather than firing from the post. Senior faculties are not so favorable to secure a better conducive workplace for young doctors. Their ignorant behavior towards their juniors is objectionable and required immediate attention to remind them that once they were also a victim of the system so rather than exploiting and harassing their juniors they should work on reforms. No point to repeat the mistake. Professional Ragging must be discouraged at their level. At this platform I pledge for active participation for health reforms and I will encourage my juniors to commit for the betterment of health care rather than to humiliate and harass them.

Being a doctor, serve at your own risk

Dr. Ankit Om is a super specialist in Family and Critical Care Medicine with expertise in all areas of general disorders. He pursued his MBBS from a prestigious college, following with the DNB in family medicine. Dr. Om has a prominent experience of more than 5 years while practicing in Ardent Ganpati Hospital, Mundka, Delhi.